Deprecated: The each() function is deprecated. This message will be suppressed on further calls in /home/dragontheme.com/public_html/wp-content/plugins/js_composer/include/classes/core/class-vc-mapper.php on line 111
 Data shows South Africans will welcome Ramaphosa's tough talk on corruption - WordPress Themes & Website Service
Skip to content South Africans have been shocked by the tidal wave of corruption testimony emerging from the commission tasked with probing allegations of state capture by private business interests.

It is clear from the 2019 State of the Nation Address delivered by President Cyril Ramaphosa that the penny has dropped and that the government will finally take a hard stance against corruption. Speaking at length about state capture, Ramaphosa described the commission’s revelations as “deeply disturbing”.

He called for swift action to be taken, saying prosecutions against those accused must proceed and state funds must be recovered. He then announced that an investigating directorate would be established in the office of the National Directorate of Public Prosecutions. The investigator would report directly to the head of prosecutions, taking action without fear, favour or prejudice.

The new directorate resembles the old Scorpions, which was disbanded under President Zuma. It has the potential to make a real difference in fighting corruption.

Taking into consideration expert and public opinion – and based on our own analysis of 15 years of data about corruption – it’s our view that Ramaphosa’s apparently decisive actions should be welcomed. Corruption has, over the past decade and a half, become one of South Africans’ biggest concerns.

Recently, Transparency International ranked South Africa 73 out of the 180 countries surveyed in its Corruption Perceptions Index for 2018, based on a score of 43 out of 100 provided by local experts. An index score below 50 reflects a tendency towards the “highly corrupt” end of the scale; it classifies the country as a “flawed democracy”. These critical evaluations are increasingly being mirrored in mass opinion.

Our analysis of trend data from the Human Sciences Research Council’s South African Social Attitudes Survey, shows that public concern with corruption has grown appreciably over the last 15 years.

Table 1: Percentage mentioning corruption as a national priority for the country, by party identification (2003-2017, cell %) 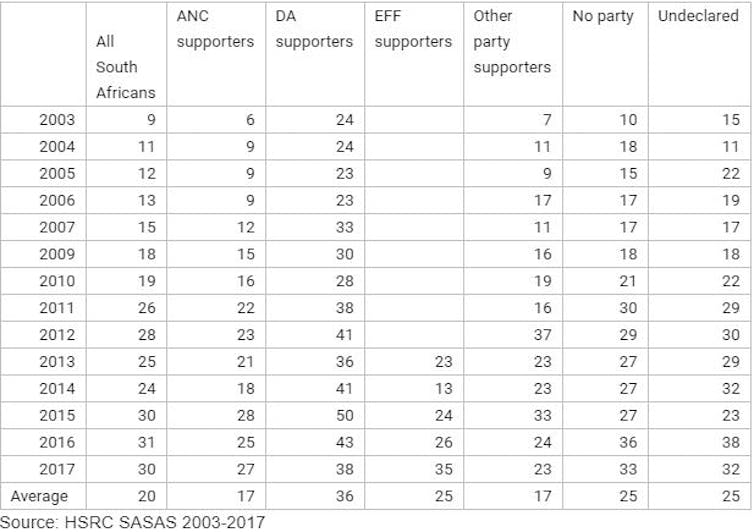 In late 2003, only 9% of the adult population cited corruption as a pressing challenge facing the country. This figure rose to 18% in 2009, 24% in 2014 and 30% by the end of 2017. This means that over the period between 2003 and 2017, corruption moved from being the eighth ranked societal concern among South Africans to the third highest ranked concern (after unemployment, crime and safety).

Given this groundswell of concern with corruption, it is unsurprising that only a modest share of citizens are satisfied with the government’s efforts to fight corruption. 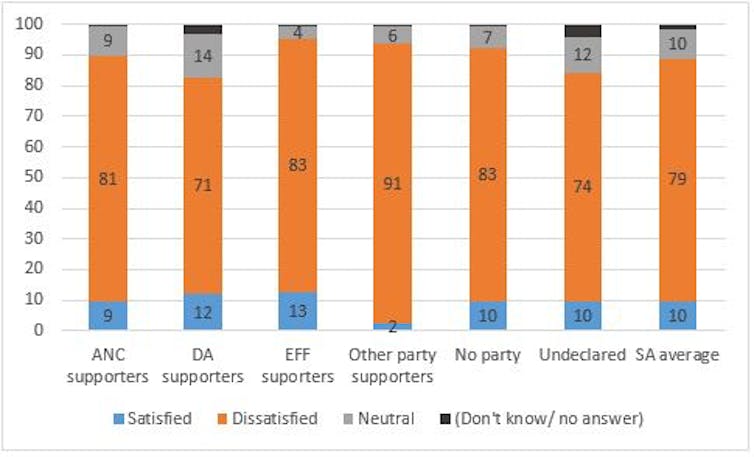 In 2017, only 10% of South Africans were content with measures to curb corruption. There is, again, a broad consensus in this regard across party support lines. Only 9% of ANC supporters, 12% of DA supporters and 13% of EFF supporters believed the government was performing commendably in fighting graft.

Alongside their general unhappiness with government efforts to address corruption, South Africans are strongly opposed to corruption. About 90% of adults want politicians found guilty of bribery or other corrupt practices to immediately step down – voluntarily.

This is a resounding message that South Africans want accountability to characterise the country’s politics and governance. ANC supporters were shown to hold some of the strongest anti-corruption opinions. It remains to be seen whether trust in government will improve over the next few years if Ramaphosa’s promises are kept.

It is clear from this data that South Africans across the board strongly favour urgent measures being taken to combat the scourge of corruption. This points to high expectations that the evidence before the state capture commission – and its final recommendations – should result in decisive action being taken against those implicated.

Ramaphosa committed in his State of the Nation speech to strengthening the capacity of institutions and government to deal with corruption. While not making a direct link, his focus in the speech on investment, coupled with measures against corruption seem to be an long overdue acknowledgement that perceptions of corruption are bad for investment and economic growth.

Finally, the nation has been assured of action. A failure to swiftly and effectively address corruption will not only have far-reaching consequences for the well-being of citizens, especially the poor and vulnerable. It is also likely to strain democratic legitimacy in the country and scare off investors who could make a real difference.

Advocate Gary Pienaar, research manager at the HSRC, contributed to this article.

This article is republished from The Conversation under a Creative Commons license. Read the original article.